I have to put my arms up and admit that I never really gave much thought to charity work until really I started watching NBC’s hit show Chuck starring Zachary Levi.

I used to watch YouTube clips with Zachary Levi between the gap of seasons. It was while watching these clips and hearing his and his friends at Nerd machine  views on charities that got me thinking more about others.

Zachary Levi gives lots of his time for charities but his main charity which he fundraisers for is Operation Smile.He recently helped out on one of their missions. 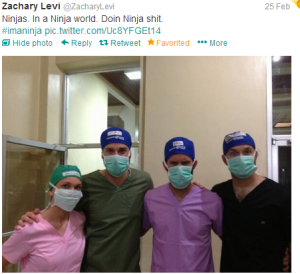 Since this inspiration I have tried to do a lot more for charity and think more about others. I have always considered myself a friendly polite person but i do think that with my autism i sometimes close off people feeling and problems (unintentionally)

So thank you Zachary Levi and Nerd Machine you have opened my eyes more in which i have set goals for myself to think momre about others and there possible feelings and problems around the world.